Editor’s note: Occasionally, this site will cover what you should (or could) feasibly wear for specific situations, outside of holidays and other big events — consider this a combination style suggestion and a look into the author’s personal wardrobe.

If you don’t have a spring jacket in your closet yet, now’s the best time to pick one up (weather-wise at least — pricing can leave a lot to be desired for some options). And even if you do have a spring jacket, there’s a different piece of outerwear that you could add for an extra dash of rugged style — the denim jacket. Once a punch line for some questionable outfit choices in the ’90’s, the denim jacket is definitely cool again. It’s sturdy and up for anything, to boot. The denim jacket can also be styled with an equally rugged henley, like this one from Mossimo. Loafers by Bass. Patterned watch strap by The Knottery.

It’s been a big outerwear piece as far as spring fashion goes for the past few seasons, and it’s certainly not going away. This post from last spring (complete with more photos) dives into the style itself and just how to wear it, but in the meantime, know that it pairs well with, well, mostly anything you throw at it. It’s an awesome blazer alternative over a buttondown, knit tie and chinos. It looks right at home atop some slim grey jeans and a white henley (more on the brand in the link there later this week). And it’s casual enough to look at ease when worn over a popover or crewneck T-shirt and yes, shorts.

Finally, it can absolutely be worn with jeans on the bottom — but if and only if those jeans are in a contrasting wash. That’s not a hard and fast rule, per se, but it helps you avoid the dreaded Canadian tuxedo. As long as it’s cut relatively trim (not baggy), it’ll definitely work. And although some pros can pull off a lightwash denim jacket, a dark denim jacket is the best place to start. Of course, if you want even more rugged outerwear, you could also throw on a waxed chore coat for maximum durability. 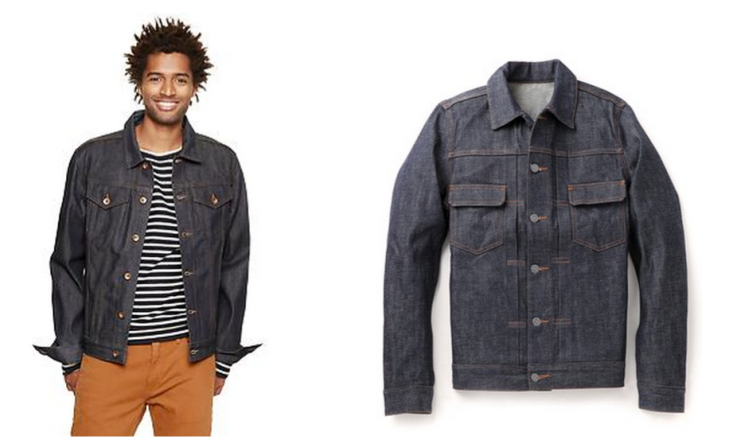 On the left: GAP’s Japanese selvedge jacket. On the right: A.P.C.’s pricer take on the piece.

As a matter of fact, venerable iconic jeans maker Levi’s is selling just the perfect jean jacket right now for a mere $47. American Apparel — despite the brand’s woes — also makes a great denim jacket for just north of $120, while GAP makes a Japanese selvedge version for about $85 on-sale now. If you just got your tax return back and feel like blowing some cash, A.P.C. is making a raw denim jacket, too.Those are all great places to start — and with spring just blooming, there’s plenty of time to hit the streets in denim.

Do you have a denim jacket? Which of the above options caught your eye? How would you wear it?