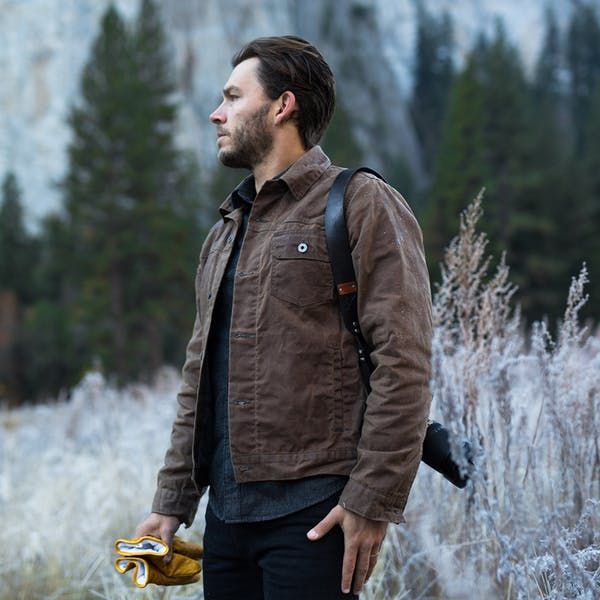 A tried-and-true waxed jacket from a famed brand.

You’ve seen it online as far as the best trucker jackets for men are concerned. And you’ve read about this classic waxed jacket on this blog for years, you’ve probably considered buying it from time to time, and now it’s better than ever. The Flint and Tinder Waxed Trucker Jacket is here for the best season in menswear, and not a moment too soon. The Flint and Tinder Flannel-Lined Waxed Trucker Jacket is nearly the stuff of legend, at least to this writer. As sold by lauded gear and lifestyle retailer Huckberry (whom I trust you know well!), this rugged jacket is one of the site’s best-selling items ever, and for good reason. It’s a tough-as-nails, no-holds-barred, stylish trucker jacket made from durable waxed Martexin sailcloth and finished off with antique metal buttons, plus a flannel lining for fall and winter warmth. With a classic-yet-still-tailored trucker jacket cut, an easy-to-layer design and space for your EDC essentials, it’s an ingenious jacket that’s perhaps one of the best jackets for men for the colder months — that’s not hyperbole if ever you’ve tried it (and I own two myself!). Heck, if you’ve been thinking about picking up this jacket, there’s never been a better time. The Flint and Tinder Waxed Trucker Jacket comes in more than six versatile, easy-to-style colorways, with tough hardware and plenty of layering potential to match. Wear it atop a chambray shirt or a classic henley (or both), then pair that combination with your favorite denim, the Flint and Tinder 365 Pants or rugged work pants — heck, do all of the above for every day of the week. This is one jacket that can do it all, so get shopping accordingly.