“How much do you know about fear?” Bond: “All there is.” Now THAT is style worth emulating for New Year’s Eve.

While most of us can only hope to be as sharply dressed as Mr. Bond up there (and headed somewhere as debonair as a floating casino), it can still pay off to dress to impress on New Year’s Eve — even if you aren’t swilling martinis or fighting henchmen. The outfit below plays off the tailored-but-tieless look that’s still popping up lots of different places, so it’s more dressed-down than Bond but definitely geared toward the formal end of the spectrum even without the tie. But if your night shakes out more casually (or formally, for that matter), know that the same basic pieces — tailored trousers, a crisp shirt and slick boots — can work just about anywhere. With that in mind, let’s get set to close out the year in style and look forward to a sharp 2016. Each of the above two options strikes a slightly different tone — the heightened color of the Deep Blue Slim Fit Suit is a vibe that’s all movie star-red carpet, a la Ryan Gosling.  Think of it as a positive style swerve if you have the basics covered. But if you’re not willing to spring for a suit in that shade or feel like saving some money (more for champagne, amirite??), a navy blue suit never fails — whether you go with the reliable Combatant Gentleman option here or with one you already own. If the jacket is too formal, the trousers could even be worn on their own with a great leather jacket or a sharp overcoat and V-neck sweater.

Your pick of collar choices for classic style.

The Standard Shirt has been profiled on this blog before and also featured prominently in a Holiday Party Style Suggestion, and for good reason. It’s lightweight, breathable and quite crisp for the price. Plus, a white shirt is a great style play in this case because it can either ground that electric blue suit impressively, or keep more in line with the classic style of a crisp navy suit — particularly sans tie. And the Standard Shirt features a tailored cut that would look more than fine when worn without a traditional suit jacket, if needed. On the other hand, a slim knit tie in a simple color — black, a la everyone’s favorite secret agent — would more than up the formality of the look. 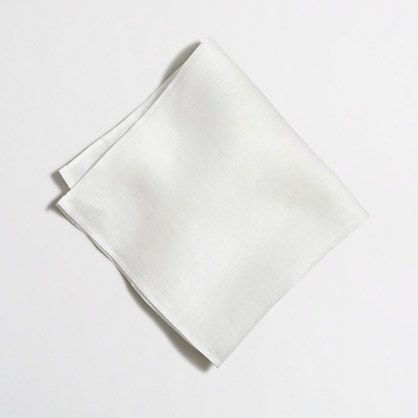 Nothing fancy — but nothing too trendy — about a timeless white pocket square.

When you go with crisp style essentials like a classic white shirt and a blue suit, sometimes there’s no need to go wild with a pocket square. J. Crew Factory’s linen pocket square gets the job done more than suitably for the price. Beyond New Year’s Eve as well, a white pocket square (even in linen) is going to add a nice finishing touch to many a tailored ensemble — so grab one now before it’s too late!

Channeling some 60s style with a tailored suit and Chelsea boots.

While Bond himself mainly favors crisp black captoes or dress boots as of late, we’ll forgo the laces with these Chelsea boots in keeping with the slick and sharp vibe of the outfit. Thursday Boot Company makes solid suede chukkas and dependable captoe boots, so it follows that the Duke Chelsea Boot  should be pretty comfortable for the price — plus, the studded rubber outsole should add nice traction on slick streets. Note that if needed in a pinch, H&M also offers a very budget-friendly Chelsea boot option.

While it might seem ludicrous at first to pay more for a belt than for a shirt, it’s a pickup that can pay big, big dividends. The Marlow Belt is a refined dress belt that keeps things super sleek thanks to the dark buckle and slim width, plus the dark black suede. For those who say black and blue can’t be worn together … well, we all know who’s bucked that theory time and again. It’s a combo that’s going to look  super crisp in this instance, especially as it grounds the heightened blue suit or fits in nicely with a navy suit. You could also go with a cheaper black leather dress belt from EXPRESS if needed. 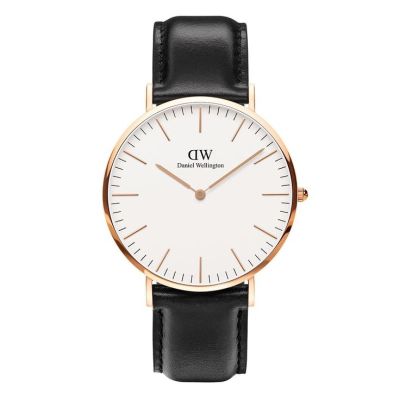 The rose gold case and markings set this watch off nicely.

The importance of timeless accessories — like a great belt or solid shoes — is no more important than when you’re going with an outfit that’s more minimal. The top-to-bottom look is pretty sleek in this case sans tie and traditional lace-up dress shoes, so a refined watch from Daniel Wellington will look right at home. While  the typical play might be to reach for a watch with a silver case here, the rose gold case color should pop nicely against the blue suit and black belt + shoes — or even dark denim and a simple cashmere sweater.

These simple grey dress socks are back again.

Last but not least, the ever-important finishing touch. Recognize these dress socks from American Trench? They’ve appeared in this blog as part of a Holiday Party Style Suggestion (among others), and that underscores their wearability and quality. Heck, you might not think about them too much once they’re on, but the dialed-in grey color and sleek  look (no crazy patterns) makes a difference when taken in context with the rest of this outfit. That’s more than worth their price upfront.

As we’ve talked about before, maybe things won’t get overly fancy for you on New Year’s Eve. However, it pays to be prepared and to get some style inspiration heading into a big night, and the new year. And if wanting to look sharper in everyday situations is a style goal for yourself, as it is for yours truly, there’s no better time to start than the present. Because, simply put, we can’t all live twice.