When offered the chance to score a deal on some of the best men’s boots — especially if said boots are a refined pair of Chelsea boots from a brand that knows how to make ’em — it’s crucial that you jump on the opportunity, especially with winter weather bearing down upon us all slowly but surely. Now, you might have noticed that the elegant yet hard-wearing Wolverine BLVD Chelsea Boots as showcased above aren’t exactly snow boots, but that’s not such a bad thing at all. When it comes down to it, every guy needs a pair of stylish leather dress boots, and there’s probably no better brand to shop for said boots at the moment than the legendary, craftsmanship-minded offerings from Wolverine. The brand has proven they’re so much more than just the much-loved Wolverine 1000 Mile line (although you’d do well to check that out, too), and the Wolverine BLVD Collection — available here for 30 percent off — proves that quite nicely.

When you don’t want to sacrifice style on slick city streets, especially heading to holiday parties or out on a date night or winter bar crawl, the Wolverine BLVD Chelsea Boots are probably your best bet. They’re built with all the specs you need in a pair of dependable boots (including a rubber lug outsole) and yet, they look as handsome and refined as dress shoes when the occasion calls for it. To keep it simple, the Wolverine BLVD Chelsea Boots (again, on sale here at 30 percent off & well under $200) fill that void nicely. Keep on scrolling though, because Wolverine’s not done yet.

Note that it’s the rich dark brown leather here that’s on sale at the moment as you shop the functional yet sharp Wolverine BLVD Chelsea Boots, and it’s ideal that the color goes with just about anything in your winter style rotation. Be it crisp dark blue indigo jeans, your favorite pair of tan chinos or even a dressy tailored, wool suit, the Wolverine BLVD Chelsea Boots should deliver the expert seasonal style you need now. And unlike snow boots or more bulky work boots, these sleek Chelsea boots are slimmed-down in profile and build all the better when it comes to understated, yet still slick, style. With stretch side panels for easy access, plus sheepskin leather lining, these handsome leather Chelsea boots for men should also prove comfortable right out of the box.

Step out in style with Wolverine men’s boots this season

It’s not every day or every season that you can score a deal on boots to take you from the office out on the town without missing a beat, but folks, the Wolverine BLVD Chelsea Boots are your best best these days. Oh, and the fact that you can buy ’em right now for 30 percent off at Wolverine? That’s what we like to see and hear. Happy shopping and stay stylish, my friends! 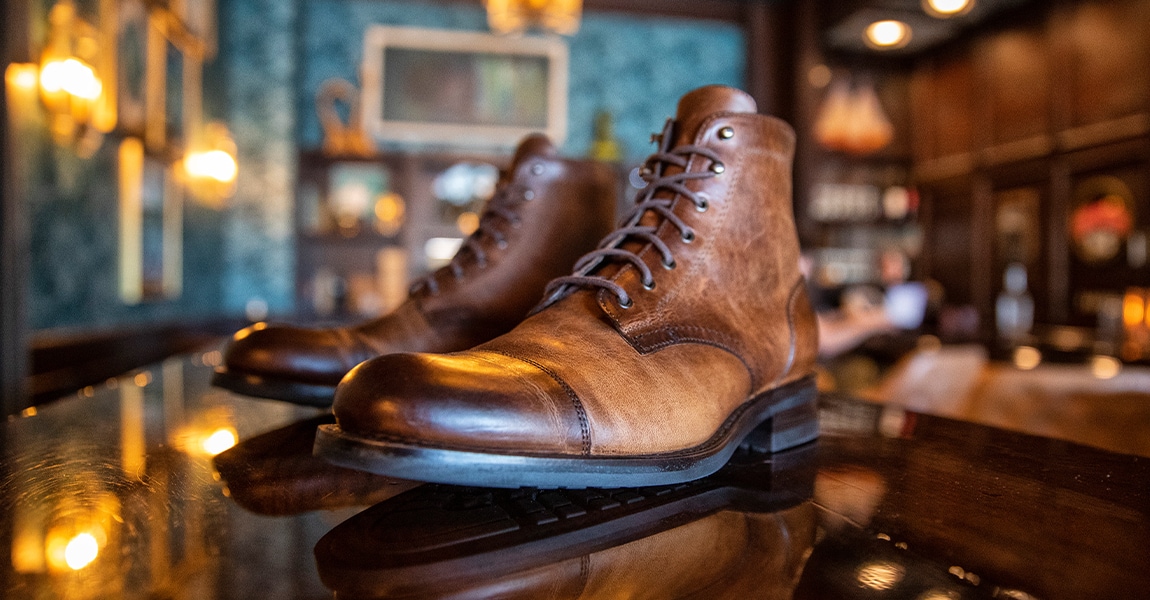 A durable-yet-dressy addition to the Wolverine line of stylish men’s boots.

Have you ever come across a pair of rugged leather boots that seem to fit in with your lifestyle so well, you’ve got to have ’em in your wardrobe and on your feet instantly? The Wolverine BLVD Cap Toe Boots could certainly be the next pair of boots to fill that void in your collection, and having tested them out myself since the launch of the Wolverine BLVD Collection, I wholeheartedly agree with that sentiment. Think of the Wolverine BLVD Collection as a more refined and yet no less versatile and rugged offering than Wolverine‘s main line, particularly the much-loved Wolverine 1000 Mile Collection. You also likely know and love Wolverine leather sneakers, so it should come as no shock that the brand can really do it all.

These durable leather boots are ever-so-slightly more dressy and more easily wearable with, say, wool trousers or classic chinos, yet there’s no denying they carry on the Wolverine pedigree quite handsomely. And here’s the thing about the Wolverine BLVD Cap Toe Boots: They’re the type of rugged yet easily wearable boots you can throw on now (with classic dark denim and a shawl cardigan) and keep wearing on into spring (when you should pair them with your favorite light wash denim and one of the best men’s T-shirts). Don’t believe me? You best try ’em out yourself. Oh, and here’s another kicker — among many that we’ll cover shortly — you can get free shipping on orders of $120 at Wolverine right now. Sounds pretty great, yes?

One of seven stylish colorways in which you can pick up the BLVD Cap Toe Boots from Wolverine.

The Wolverine BLVD Cap Toe Boots — priced quite nicely at $199 via Wolverine — carry on that same tradition and commitment to quality, starting with the fact that these timeless leather boots feature a relatively sleek profile and hand-burnished leather. These Wolverine men’s boots also feature a sheepskin lining for maximum comfort and just enough warmth on cold winter days — these boots won’t leave your feet out in the cold. The rubber outsole is toned-down and not overly bulky, yet still provides excellent grip on slippery streets. And the Wolverine BLVD Cap Toe Boots are also built with Goodyear welt construction, meaning they can be resoled after plenty of wear. Throw in the fact that seven leather colorways are up for grabs, and you just might want to get more than one pair (I personally love the Tan option shown here). Wear ’em with slim blue jeans and a refined winter topcoat for outdoor dining or a safe seasonal road trip, then keep the Wolverine BLVD Cap Toe Boots handy come spring — you won’t regret it.

A classic in any season — especially fall.

Folks, let’s dive on into another Style Pick of the Week. More specifically, let’s talk rugged fall boots — as in the standout Wolverine Original 1000 Mile Boots. They’re investment-worthy and wish list-worthy, to say the least. Surely, if you’re a #menswear fan and have kept up with the industry, then you’ll recognize the durable, classic and resurgent style of the Wolverine 1000 Mile Boot. They were a trendy favorite in the mid-2000s as workwear and made-in-America goods surged back into play, but here’s the catch — Wolverine has made these boots a modern-day classic. Yes, the handsome, rugged and timeless silhouette of the Wolverine Original 1000 Mile Boot is just as relevant today. And what better season than fall to break out a pair of classic leather boots, after all? Wolverine has come up in the past on The Style Guide, specifically when talking the best boots for fall. Why not get ready for the season with the real deal, the Wolverine 1000 Mile Boot? Ehh? Yessir, Wolverine has nearly outdone themselves once again with this easily wearable, ridiculously well-crafted silhouette — and again, the time is just right to pick up the 1000 Mile Boots, my friends. And if I were you, I’d wear them to your next tailgate, on a bar crawl or to the office when paired up with a stylish fall blazer. They’re that good.

A tough silhouette that’s not too bulky — wearable with jeans or wool trousers in equal measure.

Like other Style Guide favorites — including the Original Chippewa Service Boots — this pair of 1000 Mile Boots is built to last right here in America. Wolverine uses uncompromising standards in crafting boots that can work with every single one of your fall menswear essentials, from rugged dark blue denim and a light blue denim shirt to faded black denim and a slim striped henley — and that’s only the beginning. The thing with the Wolverine Original 1000 Mile Boots  is that they’re only going to get better the more you wear them. Heck, the pattern of the boots itself is recreated from 1914, when the original 1000 Mile Boots  launched. And the leather?  It comes from Horween, perhaps the country’s foremost leather crafters. Throw in well-considered details like flat waxed laces and a leather outsole, and you’ve got a stunning pair of boots that can certainly last … beyond a thousand miles. See what I did there? At any rate, the craftsmanship and rugged appeal of the 1000 Mile Boots keeps going and going. OK, we’re done now. Thanks for reading!

Editor’s note: Occasionally, this site will cover what you should (or could) feasibly wear for specific situations, outside of holidays and other big events — consider this a combination style suggestion and a look into the author’s personal wardrobe.

Today (at least in New York City and across much of the rest of the country), it’s winter in full force. A huge winter storm hit a large swath of the country earlier this week, and while NYC was lucky to escape major snowfall, we’ve got some snow on the ground here now. Given that, it seemed as perfect a time as any to break out the below boots — a thick, sturdy, dependable pair of Wolverine 1000 Mile Austen boots in a utilitarian black (for a full review of the boots, head here). Combined with some other winter-centric touches as outlined in the above photo, I’m all set for today’s cold weather. Reaching for a similar combination, if you work in an office, should keep you warm from car to office, or subway to office, or from the bus to the office … you get the drill.

As reviewed in 2013: Wolverine 1000 Mile Austen boots in black. The perfect shade and style for a winter day like today.

A thicker coat (potentially with an added zip-up implement, like this Kenneth Cole option pictured) could add some extra warmth while also maintaining a streamlined silhouette. There are other great ways to stay stylish and warm in the cold weather, too. Thicker textures like chambray stand up well to chilly temperatures, and layering with a shawl cardigan or v-neck sweater (I’m personally wearing a beige J. Crew Factory v-neck sweater today) could also do the trick. If you feel a hat is warranted, there are plenty of cheap options out there from, for example, H&M.

And when wearing sturdy boots like the thick ones above, some slightly heartier ribbed socks would also fulfill two functions — keeping your feet warm and fitting in stylishly with other portions of your outfit. Above all, do your best to stay warm — but keep some style ideas in mind for colder temperatures!

And in other slightly related business, keep your eyes open for an upcoming giveaway opportunity in partnership with East Dane. This post should be hitting on the site within the next two weeks!

What are you wearing in today’s chilly weather? Any further style tips or suggestions?